When we got a probably-joking comment about shipping fanfic written about Offbeat Bride’s header illustrations, you KNOW we were all over that shit. Behold now, the first ever fiction written about our branding… 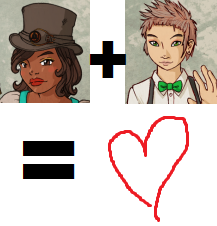 “Shiny,” Mary Sue Geeky smiled to herself as she caught her reflection in the window of the convention center. It was the first day of SteamCon, and Mary Sue’s “Steampunk Kaylee” costume had turned out perfectly. All of her well-meaning Browncoat friends had suggested she cosplay as Zoe since she was black, but Mary Sue was a Kaylee at heart. She’d made a dress based on Kaylee’s pink ball gown from the Firefly episode “Shindig” and added a brown leather corset to the bodice. She’d also traded Kaylee’s pink hair ribbon for a brown velvet top hat adorned with feathers, flowers, gears, and of course, goggles.

“Excuse me,” ventured an un-costumed woman with pink streaks in her brown hair as she held up a cell phone, “could I please take a picture of you and your friend?”

“My friend?” Mary Sue repeated. She hadn’t come with anyone. Only a few of her local friends were into steampunk, and none of them had been able to make the Con this year.

“Oh, I’m sorry, girlfriend?” the would-be photographer corrected herself. “I’m totally cool with same-sex couples. Or opposite-sex? Is your boyfriend a trans man? What terms do you two prefer? I’m really sorry, I just didn’t want to assume anything. I mean, not any of those things would be bad to assume about someone, because they’re totally not bad things. I’ve just never been to a Con before, and I don’t know whether people who cosplay as couples usually are couples in real life.”

“You’re fine, and I am gay,” Mary Sue reassured her, mostly amused by the woman’s floundering and pleased that she’d been recognized as a lesbian in such a hyperfemme costume. “But I’m not here with anyone, so I’m not sure who you’re talking about.”

“You and Simon aren’t together?” the woman asked, motioning behind Mary Sue.

First glimpse at the newest faces of Offbeat Bride

It's been four years since we last redesigned the header of Offbeat Bride, and while those three ladies (who I thought of as Lite, Gothy,... Read more

There, a few yards away, was a beautiful Asian cosplayer dressed in a perfect replica of Dr. Simon Tam‘s costume from the Firefly pilot, red-lensed wire-rimmed glasses and all. The untrained eye could’ve easily mistaken this bleached-haired Browncoat for a young man, but Mary Sue (and apparently the photographer) knew a boi when she saw one.

The situation at hand was becoming clear to Jane Lite as she watched the two cosplayers lock eyes. She grabbed Steampunk Kaylee’s hand and dragged her over to Crossplaying Simon. “Please let me get a picture of this,” she begged.

“Go ahead,” said Crossplaying Simon. She extended a hand to Mary Sue. “Ann Drogyne-Dapper,” she introduced herself.

“Mary Sue Geeky,” her counterpart replied as she took her hand. Later, all present would swear that little brass clockwork hearts few around the room as the two ladies touched for the first time.

Jane barely suppressed an epic squee as she took picture after picture of the pair. All three exchanged numbers so Jane could share the pictures.

Ann and Mary Sue spent the rest of the convention together. Their pictures went viral by the end of the day. By the end of SteamCon, they were happy to tell a curious blogger that, yes, they were a couple in real life. 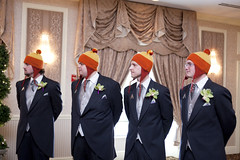 A year later, the Geeky/Dapper wedding was held at the next SteamCon. The bride wore a teal corseted wedding gown. The other bride wore an elegant menswear ensemble. Both brides walked up the aisle together to “The Ballad of Serenity.” A Shepherd Book cosplayer performed the ceremony. The wedding cake was covered in gears and topped with a Serenity Christmas ornament. The newlyweds kicked off the reception by declaring, “We aim to misbehave!”

SteamCon guests Abney Park provided music for the reception. As Jane Lite and her fiance danced to “Sleep Isabella,” the future Mr. Lite asked his bride-to-be, “Do you wish we were doing something like this instead of just wearing Converse sneakers to a church wedding and playing an instrumental version of ‘Still Alive‘ at the cake cutting?”

“This is the most perfect wedding imaginable for Ann and Mary Sue,” said Jane. “But our wedding’s going to be perfect for us.”

If you loved this post, you’ll probably want to check out Offbeat Bride’s archive of Firefly weddings

Comments on When Geeky Met Dapper: the first ever Offbeat Bride fanfic