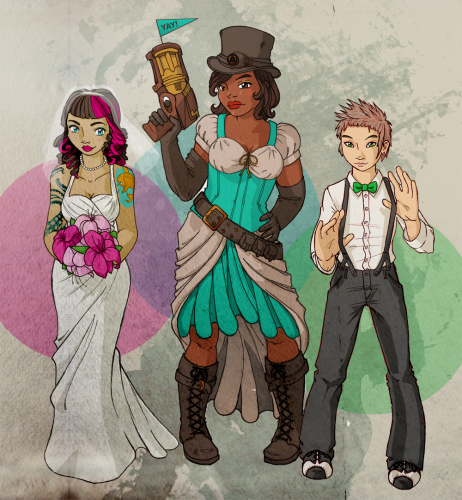 The new faces of Offbeat Bride are totally up ‘n’ at ’em! Yes, Geeky ended up not quite as big as I might have wanted, and yes, we’ve still got a few tweaks to be made… but we’re almost there!

Again, huge sloppy kisses to the illustrator, Iris Chamberlain. We’ll hopefully be seeing more of Iris’ work in coming months, as it’s my goal to add a new illustration into the rotation once a season or so. (We’re already scheming the next character, likely a blond apple-bodied retro betty with liberty rolls and glasses, rocking a pink tea-length halter-top dress with crinoline.) If you’re curious, here are Iris’ perspectives on creating the characters.

Some of you promised fanfic about these characters, and let’s just say I eagerly await it. If you need a setting, let’s just imagine that Geeky would totally be attending these panels at SteamCon IV next week.

Oh and as long as we’re talking branding, this is just the beginning of Offbeat Empire site rebrands. There are some big changes in the works for both Offbeat Mama and Offbeat Home, too. Not new illustrations, just… you’ll see.

Comments on The new illustrations are full color, and full awesome