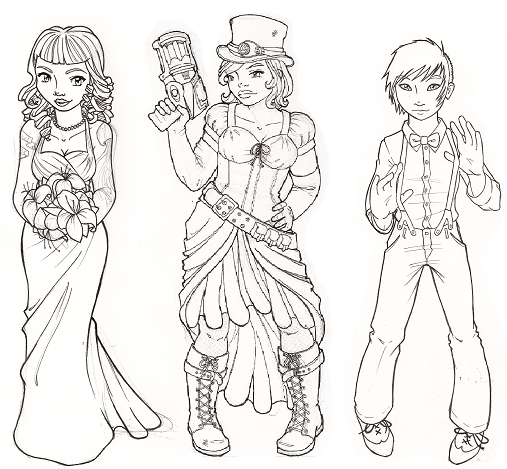 It’s been four years since we last redesigned the header of Offbeat Bride, and while those three ladies (who I thought of as Lite, Gothy, and, well, ME) had a great run, it’s time for some new faces at the top of Offbeat Bride. We’re still in the process of finishing (and holy fuck you guys, wait until you see the colors!), but I’m too excited about them to keep them a secret any longer, so even though they’re not yet done being inked … HERE THEY ARE!

Endless, undying thanks to Iris Chamberlain of Start Here Designs for creating these beauties (and allowing me to share her work before it’s fully done). Iris has a pretty deep understanding of the Offbeat Empire’s branding, as she’s the graphic designer who created the blog template designs that all the sites use. But Iris is more than just a Photoshop junkie — bitch can DRAW, too. I commissioned her last month to draw that little offbeat octopode tattoo we gave away at WMBA, and I was so stoked on her illustration that I had a moment of being like OMFG I’M REPLACING THE BRIDE CHARACTERS WITH OCTOPODES. Luckily I reigned in the tentacle madness (FOR NOW), and we’re sticking with humans.

So with many thanks to Iris for dropping her entire life to draw stuff for me, we now have these three new faces for Offbeat Bride… and hopefully, they’re just the first three of what will be a become a larger rotating cast. Because really, how could three figures ever hope to capture even a fraction of the diversity of Offbeat Bride’s readership? That said, with these three new faces, I feel like we’re already taking a big step towards improving how we represent our beloved readership.

Of course I’ve got my own elaborate back-stories for each of these three, who I think of as Lite, Geeky, and Dapper… but I don’t want to put any words in their mouths. I’d rather just let Iris’ wonderful sketches speak for themselves, and allow readers to find their own pieces of themselves to recognize in each figure.

We should have the colorized versions of the new characters up next week, and then I’m hoping we can add a new face once a season going forward.

PS: If you’re curious, here’s the illustrator’s perspective on the characters.

Comments on First glimpse at the newest faces of Offbeat Bride