A couple months back, I mentioned I was working away on trying to sell my second book, which had the working title of ONWARD.

The first draft of the book was completed, and I spent last year talking to a series of literary agents and publishers who all seemed to have the same feedback: you can’t sell this particular book, in this particular format.

What was the problem with ONWARD?

“You know what doesn’t sell these days?” an editor told me. “Memoirs, or divorce books, or books about grief.” H’okay then! 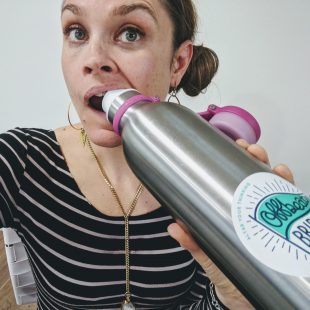 Oh hello there, friends. It's been a while. January 2018 marked the 11th anniversary of the Offbeat Empire, and -- first, ok let's just acknowledge... Read more

A literary agent told me, “Ten years ago, all of these books were NYT bestsellers, but these days I know it would be nearly impossible trying to get them placed with a top publisher. The truth is that publishers aren’t currently buying recovery books unless the author is a celebrity. I was able to finally place a divorce/grief memoir a couple years back with a tiny press after about 30 rejections.”

I had a couple guinea pig readers who read ONWARD and reported that the material was a weird punch in the gut, and that it was hard, while going through their own experiences of grief, to read my extremely graphic descriptions of my own.

I also got the repeated feedback that what publishers wanted from me was a book like Offbeat Bride: a memoir/service hybrid that was a proactive, personal approach about how I got through a difficult process, offered up as cheerleading for those going through their own difficult processes.

If I want to sell this book (and I do want to sell this book), the format needs to be a mix of memoir and material that’s more service oriented, prescriptive, how-to, and self help-ish. In other words: most people don’t want to read about me puking all over myself in grief. Or maybe you want to read about it for a little bit because you relate… but then you want to know how to wipe up the grief-puke and make some art out of it or maybe build a puke altar or do some weird puke dancing to help you move past the puking, you know?

“Hmm,” I thought to myself. “I mean, this makes sense I guess. I’ve already written the memoir half the book… but ug. I don’t know that I have the emotional stamina to write the service half. If only I knew a writer or editor who was well-versed in the Offbeat voice and this kind of material who I could hire to co-write the other of half of the book…”

Lightning strike: DUH, over the last 12 years, I’ve employed an amazing crew of writers and editors, and I could hire one of them to help me whip this shit into shape. I reached out to Caroline, who spent years as my copyeditor, who’s now got their PhD and is living in France and will maybe they’d want to help… and voila!

So now here we are: Caroline is balls deep in my draft of ONWARD, reworking it into a hopefully more marketable book we’re currently calling Offbeat Resilience: Rebounding From Life’s Shitty Set-Backs. That’s just a working title… these things have a way of changing after acquisition.

Caroline has spent the last month rejiggering the content from a sequential memoir (it had four parts, each dedicated to a season of my first year of divorce recovery: The Fall, The Winter, The Springing, The Summer) into a more topical book (still with four parts: Mind, Body, Spirit, Integration). They’re hacking up what I’ve written, and massaging each part into the topic buckets, and then sandwiching my memoir barfing between slices of service bread: first giving my narrative some context, and then tying it back to more actionable, service material to help readers actually grieve forward.

My draft of ONWARD was about 80,000 words and full of grief puking, queer cheerleaders, sound healing, burlesque dancers, weed smoking, reiki, opera singers, loss training, talk therapy, gunslingers, dopamine hacking, and lightning shooting out of my hands. Some of that stuff will still be in Offbeat Resilience, but lots of it is getting cut because I mean, how relevant is it really that part of my healing process involved talking about gonorrhea pee on a playground with some new mom friends?

Ultimately, Caroline’s probably going to cut about half of what I wrote in the first draft — and that’s great.

But what about those 40,000 words getting ditched?

As Caroline is hacking up my material, they’ve been handing me back some chunks of text that they thinks have value either as ancillary book content (I probably have enough weird, dirty, woowoo shit for a side e-book called Offbeat Resilience: The Hidden Chapters), or possibly as stand-alone posts separate from the book.

…Because while gonorrhea pee maybe isn’t super relevant for this book, maybe it’s a decent slice-of-life post for Offbeat Home & Life that can start an interesting conversation about the awkward ways those of us with kids try to make mom-friends? Who knows! We’ll toss the post up on Offbeat Home & Life and see.

Or as I said recently on Insta stories…

I was talking a lot about this project on my Instagram, but it was starting to get ridiculous that I was talking about heavy shit like grief and spirituality and self-improvement on Offbeat Bride’s Insta Stories. Offbeat Bride followers are just tryna find some wedding planning advice, and instead they get some middle aged lady rambling about her dead dog, and her daily movement practice, and random fart jokes? OY! Branding mis-fire! So I set up a new account just for me, and started it with a post about this project:

I’m also going to be posting weekly Offbeat Resilience-relevant content on Offbeat Home this fall. You can read those posts here: offbeathome.com/tag/offbeat-resilience. As for the book itself, I’m deep in conversations with the folks at Seal Press about it, and my co-writer Caroline and I talk weekly as we work through the development and writing of the book. At this point, I’m hoping for a 2020 publication, either with a publisher or via my own platforms.

Seal Press, publisher of my first book Offbeat Bride, has acquired this book! The title is now Shitshow to Afterglow: Putting Life Back Together When It All Falls Apart, and it should be on shelves in 2020.

I’ll be sharing a full update in January… but things are happening!

Comments on Onward, Offbeat Resilience: the book that became Shitshow