It’s been a year since we introduced a new character to Offbeat Bride’s header, so it’s high time that I introduce you to the newest lady to grace the top of our pages. We call her FIERCE, and you’ll be seeing her in rotation of the header of Offbeat Bride starting tomorrow.

Last year, several readers suggested that we add a bride character with a disability — or rather, a VISIBLE disability. (As I’ve pointed out before, how do we know that Dapper isn’t dealing with fibromyalgia, or Lite isn’t Deaf, or Geeky doesn’t have a chronic pain condition? Disabilities aren’t always obvious.)

But I get it: Offbeat Bride is truly committed to portraying diversity in all its forms, and bride with a visible disability is a great expression of that. 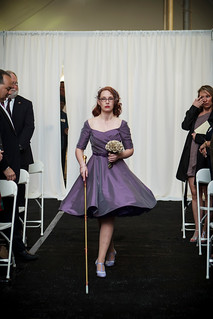 So Fierce is not only rocking her long-sleeved dress and Natural Hair, but she’s also visually impaired and dishing some skull-topped cane realness as she struts down the aisle.

Some of you may remember the wedding of Elsa (aka Snarkbat) we featured last year, and she was definitely an inspiration here. In fact, I asked Elsa to consult on the initial sketches to make sure that Fierce was holding her the cane correctly, and how we could convey Fierce’s visual impairment in a way that felt recognizable, while also being realistic.

As always, big massive slobbery hugs for Iris Chamberlain, the long-suffering designer and illustrator who I’ve been working with for five years. She designed the templates that all the blogs use, and she’s been creating all our bride characters for the past two years.

Since we’re talking header illustrations, it’s a great time to also give shout-outs to the artists responsible for the other two site headers. Ursula Young did the header of Offbeat Home & Life — which feels fitting since she’s a painter who lives in a yurt in rural Northern California. And my sweet friend Ellen Forney did the header characters for Offbeat Families. (We featured Ellen’s work in that Offbeat Home & Life post last week about depression.)

First glimpse at the newest faces of Offbeat Bride

It's been four years since we last redesigned the header of Offbeat Bride, and while those three ladies (who I thought of as Lite, Gothy,... Read more

I’ve also got schemes a-foot for finally developing a real logo for Offbeat Empire’s header. The Empire Strikes Back logo was a joke between myself and my friend/old developer JMDodd; something she mocked up for me for fun during a late night IM session, that then just sorta defaulted to becoming the actual logo. (That’s the same way the Offbeat Empire got its name… when I worked at Microsoft, I used to joke that I split my time between The Evil Empire and The Offbeat Empire.) One of these days I’ll get around to doing the new logo, but a new bride character is probably enough graphic design work for now.