I got an interview request recently from a woman named Claire Hawkes. She’s the Social Media Manager / Keeper of the Shire at WeddingMix, but she’s also majoring in Advertising/Public Relations at Loyola University in Chicago. She asked if she could interview me for her senior thesis, and I said sure. With her permission, I thought I’d share the interview here.

After reading through The Business of Offbeat Bride white paper, I was especially excited to get your thoughts on brand strategy and catering to your readership.

The business of Offbeat Bride

This post was written in 2008, and while all the numbers are many years outdated, it’s a good look at the early history of my... Read more

Cool! That white paper was written in January of 2008, so while it accurately represents my early strategy, a lot has changed since then — both in terms of my business, and in terms of online content as an industry.

I read that you originally envisioned Offbeat Bride would attract non-traditional brides searching the web (in addition to your book readers). After so much audience growth, how do you define and segment your current target reader(s)?

My strategies have definitely shifted over the years. My initial target readership was super weird people planning super weird weddings. I assumed that if they were using the web to plan, they’d be pretty nerdy, like me.

It became clear within a year that the majority of my readership was not actually all that weird, nor were they especially tech savvy. The majority were brides planning what initially appeared to be relatively traditional weddings, looking for creative and unique ideas to make the weddings feel personal. Despite the fact that many of these folks didn’t define themselves as especially non-traditional, they were attracted to the tolerance, supportiveness, positivity, and thoughtfulness of Offbeat Bride’s brand values.

Almost 8 years after the site launched, I’d say that really only 10% of my readership is the “super weird and nerdy” market I’d originally targeted.

What types of research tools do you use to keep up with what’s up-and-coming to your target readers(s)? How do you know which creative content will resonate with your audience?

Offbeat Bride has a private online community component called the Offbeat Bride Tribe. While its traffic is WAY lower than the blog (like 10k unique visitors month as opposed to 1.2 million), it’s a slice that’s super vocal, super engaged, and highly invested. We source content from the Tribe, but I also just follow along with discussions there as a great indicator of what issues are hottest with Offbeat Bride’s readership.

As far as knowing which content will resonate, my editors and I have developed some key metrics that help us predict what posts we think will perform well (for instance, I knew the minute I saw the first photo on this post that it was going to go viral)… but it’s always a guessing game.

Generally speaking, we look for the sweet spot between content that’s positive but also provocative, relevant to consumers as well as industry readers.

What types of communication planning mistakes do you see other wedding brands make the most often?

If you’re talking about mistakes made by wedding vendors, it’s gotta be this one.

You run sponsored posts from local wedding vendors, yet Offbeat Bride is a national brand. What have you done to demonstration your value as an advertiser to vendors based in specific cities?

We often pull geo-locational analytics for wedding vendors to let them know how many readers we have in their area. Of course, vendors in our most popular markets (New York, London, Chicago, Seattle, Los Angeles, etc.) tend to do best… but often couples in “less offbeat” markets are so hungry for vendors that understand their needs, that even vendors in smaller markets have had some impressive results. 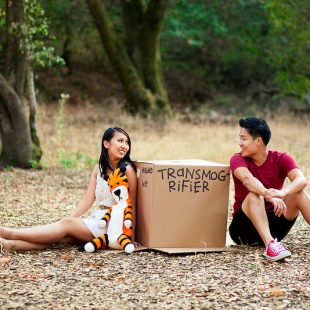 Wedding photographers: this is what can happen when you get featured on Offbeat Bride

Also, sometimes with our sponsored posts, vendors aren’t looking for sales… they’re using us more as a public relations platform, and a way to establish their visibility and authority on a national level. For some vendors, their goal with a sponsored post isn’t conversions… it’s increased credibility and conversations.

What is the most surprising way your brand’s identity has changed since the site launch?

Inclusivity. Originally, Offbeat Bride really was targeted to only the most weird couples — but it quickly became clear to me that I was shooting myself in the foot by alienating my more traditional readers. After all, there’s more of them! Why would I limit my business or make people feel bad?

So I expanded my brand to be more inclusive, while still staying pretty weird. (It’s always fun to watch my more traditional readers wrestle with this friction — we DO lose readers when we feature, say, polyamorous weddings. I’m ok losing intolerant readers.)

I place an emphasis on self-identification on the site — we never call a wedding a “lesbian wedding” unless that’s how the couple has identified that way. In this same way, if someone defines themselves as an Offbeat Bride… then they are! I don’t care if they’re getting married in a white dress in a church with pink flowers and organza tablecloths, or if they’re a groom — if they identify with Offbeat Bride, then they are an Offbeat Bride.

Inclusivity isn’t just about being kind to as many people as possible — it’s good for business.

You guys know I aim to be pretty transparent about how I run the Offbeat Empire. Anyone have any questions they wish Claire had asked?