We also feature two vendors each week as part of our sponsored posts, which run on Tuesdays and Fridays. Megan lovingly writes each of these posts as a personal way to introduce Offbeat Bride readers to the Offbeat Bride vendors who we adore.

When we talk to vendors about doing sponsored posts, we often hear them say that they don’t want to do a posts that’s sponsored — they’d rather be featured in “real” editorial content, in the form of a wedding photos post. So, here’s the question: from a vendor’s perspective, which kind of post performs better? Is it better for a business to have a wedding they worked on featured on a blog, or to do a sponsored post on a blog?

Most recently, in May we did an editorial feature of this wedding Carly photographed, and that shit went crazy viral. It was pinned non-stop by Offbeat Brides thousands of times, and then rippled out into the rest of Pinterest. Five months later, the post still gets 200-300 views/week: 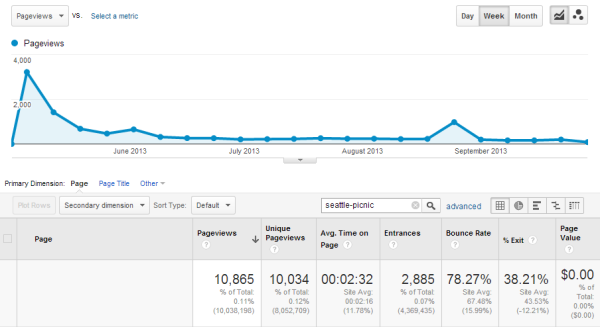 So, how have these 10,865 pageviews on this editorial feature translated into results for Carly? When I shared this stat with her, she responded:

Holy kaw! That is SO awesome! And yet, kind of confusing… I never got any work from the feature.

The first Sponsored Post I did with you, I ended up booking 9 weddings through it, some for that year and a few for the following.

I mean, it’s AWESOME that the editorial post is getting so many hits, but with that many views per week??? You’d think I would have gotten ONE email from someone interested in hiring me for their own wedding! So glad it’s such a hit with your readers though.

This wasn’t surprising to me AT ALL. This really is the difference between a sponsored post that’s all about YOUR WORK and why YOU’RE AWESOME, and an editorial feature, where it’s all about the wedding. Ultimately, the readers who are pouring into editorial posts aren’t usually in it for the vendors… they’re in it for the naked cake, the blankets on the lawn, the pretty headpieces, the vintage suitcases, etc.

[related-post align=”right”]Whenever photographers are like, “I don’t want to do a sponsored post, because I think I’ll get more work from an editorial feature about a wedding I shot,” I’m always like, “Well, we can hope so, but I don’t often see that pan out…”

When it comes to editorial content, you have to wonder how many people could even recall who the photographer was for a specific pretty wedding they saw online. People often just get too distracted by the pretties!

If you’re ready the take the plunge with us on a sponsored post all about YOUR business, let’s get scheming.