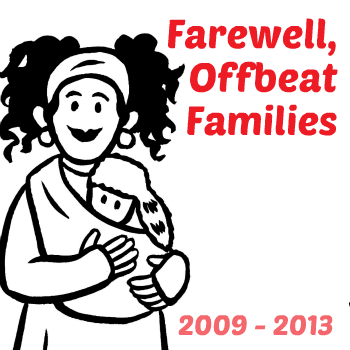 Over the years, I’ve made no secret of the fact that Offbeat Families (formerly known as Offbeat Mama) has been a challenge. The site launched in September of 2009, and I invested four years and about $40,000 toward growing the site into a sustainable, financially-viable business. Ultimately, these efforts have not succeeded, and we will no longer be updating the site.

I want to stress that the failure of Offbeat Families is a market failure — not an editorial failure. Unfortunately, as a publisher, I was never able to translate the site’s editorial success into sponsorships or ad sales. There were months when the site broke even (mostly thanks to invasive banner ads that some readers really didn’t like), and there were a few months when it was mildly profitable… but mostly it’s been years of lost money, and me continuing to publish the site out of a sense of responsibility to Stephanie and the readership.

It’s really hard to recognize when it’s time to euthanize a project, and knowing what I know now, I probably should have put Offbeat Families down years ago. Hindsight is twenty/twenty, bla bla bla. The decision has finally been made: we will no longer be publishing new posts on Offbeat Families.

We touched on most of the nitty-gritty in our farewell post on Offbeat Families, but here’s a bit more info:

The offbeatfamilies.com homepage will shift from featuring the newest posts, to an easily browsable/searchable archive. Nothing will be deleted. No post links will change. Posts you’ve loved will still be there, ready to re-read or share. Although comments on all posts are now closed, existing comments will remain up.

Offbeat Families’ Facebook will become a steady stream of links to “greatest hits” from the site, and Offbeat Families Twitter, and Pinterest accounts will stay online for a while so we can keep you posted about the families content on Offbeat Home & Life. If you’ve been following via RSS, I hope you’ll consider subscribing to Offbeat Home’s RSS feed. If you’re subscribed to the Offbeat Families email newsletter, you’ll automatically be shifted over to Offbeat Home & Life’s newsletter, as of tomorrow. We hope you’ll like it, but if it’s not a fit for what you want, our newsletters always make unsubscribe an easy, one-click process.

UG SO MANY FEELS

I hope that those of you who have loved Offbeat Families will follow us over to Offbeat Home & Life, but I understand and respect that the shift may not be a fit for some of you. As a reader, you have to make the best decisions for yourself about what you want to read. As a publisher, I have to make the best decisions I can to keep my small business viable — and this is one of the toughies.

Given the difficulty of this decision, I don’t have the energy to compare theories on why the site failed or rehash what we coulda/woulda/shoulda done differently. The decision has been made, and at this point I’m choosing to look forward with excitement toward having extra resources and energy to funnel into Offbeat Home & Life … in fact, we’ve got a whole post about it over there!