Over the years, we’ve had dozens of posts go viral across the Empire’s blogs. Lesbian gamer weddings, unplugged weddings, Medieval tavern-themed gaming rooms, liberal bullying… we’ve seen lots of posts go viral, and they all have some common themes:


Today, Offbeat Mama is having its highest traffic day since launching in 2009 because a post called I’ve started telling my daughters I’m beautiful has gone viral. But it’s going viral in ways I’ve never seen before. If you like nerding out about this kind of thing, huddle up. Let’s take a look at how this post is different…

No links from high traffic sites

As of yet, this post hasn’t been picked up by any big websites. Its spread has been completely organic, and mostly via Facebook and Twitter. The post published yesterday around 11am, and immediately people started sharing it with their small pockets of followers. We’re not talking big influencers with thousands of friends or followers — from what I can see, most of the people sharing the post on Twitter have on average only a couple hundred followers.

Despite no big hitters linking the post, the social media spread has been insane. It’s being Liked on Facebook almost 20 times per minute. (It was up to 41,000 Facebook Likes 33 hours after publishing.) Here’s a screenshot of Offbeat Mama’s Chartbeat stats’ social page, which is just this non-stop stream of tweets and Facebook shares:

A hundred thousand hits, and no one’s trolling

Here are the site analytics for Offbeat Families, six months after we ceased publication. This traffic is mostly Facebook-driven, and the sad truth is that... Read more

What’s insane about this post is the total lack of shitty comments. I mean just… none. There was one incredibly sad comment, but for the most part, of the hundred thousand readers… exactly ZERO have chosen to be shitty. This is almost infathomable, especially on a parenting site like Offbeat Mama. I loves me some Offbeat Mama readers, but the site is known internally for being the most difficult Empire blog to moderate, with comments that run the gamut from mind-blowing medical over-shares to psychotic snaps to dogmatic brow-beating. And yet today? It’s all beauty and love. This brings me to our next point…

Usually posts that get high traffic have something a tiny bit controversial in them, even if it’s just “Can you believe they did that?!” On Offbeat Mama, the posts that have gone viral in the past have included one about being a responsible stoner parent, and another (that’s since been unpublished) about a homeless family with a baby. The traffic spikes on those posts were sharp enough to cut, and Stephanie (Offbeat Mama’s editor) and I would sit at our respective laptops biting our nails and feeling generally awful. Those spikes felt, on a certain level, like trainwreck traffic: Ermagerd, what have those offbeat freaks gotten into now?

By comparison, the post that’s gone viral this week is just pure love. It’s about respecting yourself as a way to model how you hope your children will respect themselves. It’s been linked by everyone from Rolling Stone political editors to gentlechristianmothers.com. There’s nothing controversial in the post, nothing to judge, no one to tut-tut-tut at.

Honestly, being a web publisher can start to kill your sense of humanity after a while. The cynical trainwreck traffic, the misanthropic comments, the never-ending complaints, the fact that the internet never sleeps. But today, right now, for just a moment… my faith in the internet is restored, because a lovely post about being kind to yourself has spread across the web and no one is being shitty about it. Even better, now I’m working with the post’s author, Amanda, to try to get a book pitch together.

PS: If you want to dork out on some real-time stats as this traffic spike is happening, grab your popcorn and join me over on Chartbeat. 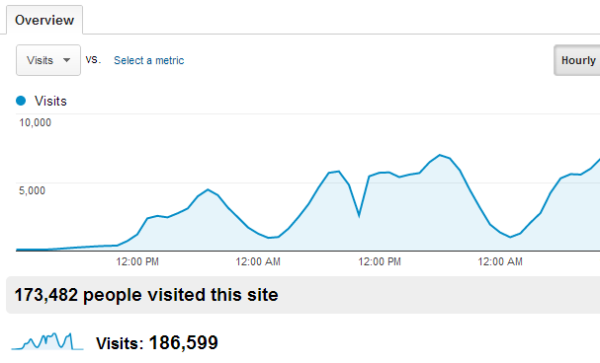 …and it’s still going. Things are slowing down a bit, but hourly traffic is still at 10x Offbeat Mama’s normal levels: