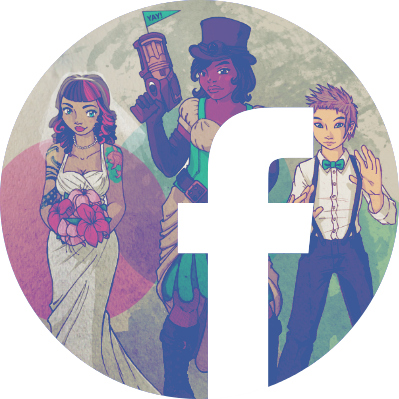 I did two small surveys last week, and while I’ll be sharing the results of the Offbeat Home & Life survey on offbeathome.com tomorrow, I thought I’d take a quick minute to share the results of the survey I did about Offbeat Bride’s Facebook page.

First, lemme give you some context on this survey: I’ve talked a LOT about my conflicted feelings about Facebook, but things have changed over the course of this year as I’ve been shifting my thinking about recency vs relevancy.

Also, the recent performance of Offbeat Families’ Facebook page has pretty much blown my mind.

Moral of the story: my contentious publisher relationship with Facebook is shifting, and I conducted this survey to help me confirm some hunches.

Let’s see how it played out…

How do you feel about the frequency of posts on Offbeat Bride’s Facebook page?

This first question is pretty straight-forward and suggests that Facebook’s algorithms are mostly working. If you feel like we’re posting “just the right amount,” that means that Facebook is showing you just the right number of posts. It’s not actually all that reflective of how much we’re posting — it’s how many posts you’re seeing. For 83% of you, Facebook is doing a good job of showing you an amount that feels good.

If you’re part of that 9% who wishes you saw more from us on Facebook, I suggest you engage with every single Offbeat Bride post you see on Facebook, which means liking, clicking, sharing, or commenting. Given Facebook’s algorithms, engaging with a page’s posts is the only reliable way to ensure you’ll see more of them.

No real surprises here. I made a point to have Polldaddy list the options randomly, but this is exactly the order I expected to see — and pretty much exactly matches what we’re currently doing. Right on.

How do you feel about the comments on Offbeat Bride’s Facebook page?

Rita, this is mom: Facebook comments are the worst

We all know I hate Facebook comments. Here's just one example of why...

Oh, Facebook comments. I cannot tell a lie, you guys: of all our feedback/support channels (email, blog comments, Twitter, FIX TYPO submissions, etc), the comments on Facebook are consistently the least informed and most challenging. I suspect this is because lots of folks who follow us on Facebook are unfamiliar with the Offbeat Empire and its culture (more about that in a second)… but regardless, it’s good to know that only 3% of you have witnessed the weird and gross comments that show up on our Facebook posts. We try to catch them quickly, but even Offbeat Empresses have to sleep sometimes… and you guys, the weirdos on Facebook never sleep.

While this could create a significant business challenge, our Facebook page is monetized (SHAMELESS PLUG: Email us if you’re interested in an oh-so-affordable sponsored social media blast!) so from a business perspective I’m not too worried about the loss in pageviews.

It does mean, however, that there are some significant cultural differences between how posts perform on Facebook vs how they perform on the blog. That includes comments: people who are willing to comment “TACKY!!1!!” on Facebook are WAY less likely to type their name and emails on the comment form of the blog. I think of it as a barrier to entry. That performance difference also means that pretty pictures and hooky/tantalizing titles perform better on Facebook — while more thoughtful posts do better on the blog.

When you see a link to an offbeatbride.com article from our Facebook, do you care when the post was originally published?

Here’s the question I was most interested in. Since we have a transient readership where the vast majority of the site’s audience turns over every 18 months or so, I’ve been testing out how it feels to bubble up older posts via our Facebook page. They often perform better than the new posts, because as these results make clear: only 7% of you really just want to see new posts. (And to that 7% I say: I love you hard. Are you following the site via RSS or email newsletter? Because those are exactly designed for readers who want to exclusively follow new posts.) The vast majority of you don’t care when a post was published — you just care if it’s of interest to you right now.

Oh, and for the 8% of you aren’t even sure how you’d know a post’s original publication date, check the URL — you’ll see the month and year in there! For example, http://offbeatbride.com/2010/03/unique-first-dance-songs was originally published in March 2010.

The recency vs relevancy results here completely support everything I’ve been learning about Facebook and content marketing this year, which is great news. This is definitely shifting my feelings about Facebook. I still find it a frustrating tool in more ways that I can count, but I’m starting to recognize that its algorithms do a great job of ensuring that our current followers see content that’s interesting and relevant to them.

I know the survey didn’t have an open form at the end, so if you have any questions or feedback, pour ’em into the comments below!

PS: I’ll say this because if I don’t, I know someone will ask in the comments: if you follow us on Facebook, the best way to support Offbeat Bride is to engage with both our Facebook posts (like! comment! share! click!) *AND* our blog posts (comment! share via email or other social media). To be clear, I don’t expect that what’s best for my business is ANYONE’S priority but mine, and I’ve always said that the best way to support the site is just to interact with our content in the ways that feel natural, but I know that some of you want to know, so there you go.