Recently, a post I wrote about cell phones at weddings went WAY viral, getting shared 43,000 times in one day. It wasn’t an accident. Here’s how I did it.

Megan and I have had a couple discussions in months past about how much wedding photographers hate the ubiquity of guests with cameras at weddings. We’d both seen tons of photographic examples, and seen photographers bitch about it all over the web.

Two weeks ago, Jenny Jimenez, my favorite Seattle photographer, posted on her Facebook: 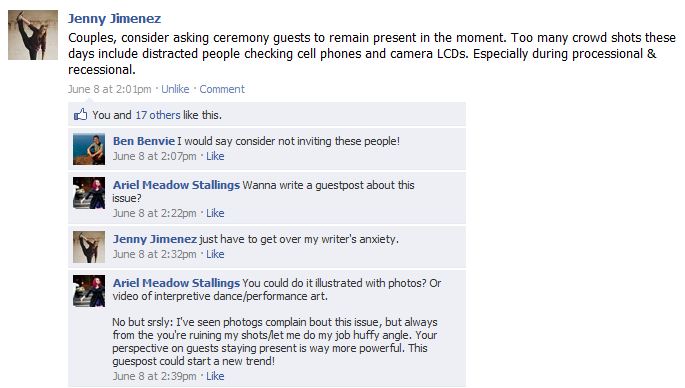 What I loved about Jenny’s perspective is that it wasn’t about the guests making her job hard — it was from the angle of guests truly being present for the event. It was less about professionals bitching, and more about couples and their guests being in the moment.

I got REALLY excited about the idea. I chatted with Jenny (who voiced that she wasn’t comfortable writing about it — didn’t want to upset clients), and so I decided that I’d take the idea and run with it.

It was immediately clear to me that the topic was going to be HUGE with photographers. Although I aimed the story firmly at Offbeat Bride’s readership, I knew that it would be photographers who’d spread the post.

Have you ever visited Pinterest's "Source" page for your website? This is the page that displays the most recent pins sourced from your website. You... Read more

See, the topic has been written about MANY times — but when photographers talk about it, it comes off as bitching. Essentially, it comes down to a service provider bitching about their clients — “They make it so hard to do my job! All these uncle bobs getting in my way! Fuck those people!” Here’s just one example.

But Jenny’s post gave me the perfect angle to approach the issue, not from a “it’s so irritating” angle, but from a positive, encourage your guests to be present with you way. This isn’t about a whiny photographer not getting their shot, it’s about families and friends being able to connect. That said, since I knew that wedding photographers loved to bitch about it, I knew they’d spread the word for me.

Megan and I did some brainstorming — this trend piece needed a nice phrase that summarized the concept. What it needed was some branding. It needed a quick elevator pitch phrase to encapsulate the concept. We bantied around a TON of ideas (I wanted something that rhymed or had alliteration), and “unplugged weddings” was the best of the batch. (Unplugged should sound familiar to some of you. All part of the plan. But I’m getting ahead of myself….)

First I found some sources and quotes, which was easy thanks to the beast that is the Offbeat Bride Tribe. (Note to self: I really need to make better use of that as a market research tool.)

Then, sources in hand, I sat down to write the post, which got so long it that I broke it into two posts. This was extra awesome because it stretched the first traffic spike over 48-hours. The first half was written as a news article — the title was distinctly newspapery, and I did things like include sources full names, locations, and ages. The second post was all about the actual practical advice for brides.

The first post went live at noon on Monday. The initial publicity push was modest:

Again, my primary strategy was that the post be heavily shared by photographers. And it was. Monday afternoon and evening, the first wave of photographers closest to us (sponsors, readers, friends) spread the story via Facebook and Twitter.

By Tuesday morning, Twitter was updating every minute or two with a photographer posting the story on Facebook (which then propagated to Twitter). The story had trickled out from offbeat/indie to the wider community of photographers — both from Big Fancy Expensive Pros to tiny small-town photographers who also do auto photography and have 29 followers on Twitter.

(Comments shifted a bit at this point, but this is a post about public relations, not comment moderation/community management.)

BONUS: ad sales leads!
At a certain point, I looked at the pages and pages of tweets from photographers and realized we were sitting on a goldmine of advertising leads. I wish I could say I’d thought of that when I first schemed the idea, but I hadn’t. But Tuesday morning I sicced my ad sales team on the Twitter leads, and that turned out VERY well.

I know the value of going unplugged — I’ve talked about it in the media before. This, combined with Offbeat Bride does make me an authority on the subject. (Right? SURE!)

The story is perfect for media pick up: seasonal, timely in terms of the national discussions of technology in our daily lives, a tiny bit controversial (are couples being selfish? are guests being rude?). It’s the perfect story to pitch at a national level.

Here’s who I pitched:

Welcome to public relations. Welcome to the way the media words. It’s kind of creepy and crazy, but I get it and can totally be creepy in that kind of crazy way.

Nobody’s picked up the story yet, but this second wave takes a little longer than the first. If I’d been REALLY on top of it, I would have been pitching the story a little earlier — it’s already mid-June! — but whatever: media can move fast for an easy, puffy trend piece.

I had this big aha a few years ago that I was going around things the wrong way: I kept pitching news outlets with stories I wanted to write, but I suddenly realized that no, I didn’t need to WRITE the story. I needed to be IN the story. I mean, I do cool shit! I know about cool things! Why be the invisible, opinion-less news voice writing the story, when I could be BE the story?