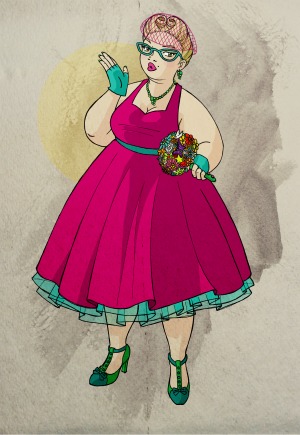 [blockquote]Lisa said
Can one of the next pictures be a fat bride? There are a lot of fat brides reading OBB and featured in posts so it would be great to see that reflected in the header.[/blockquote]

Ariel said
Funny you should mention that, Lisa.

Geeky was supposed to be plus size. Here’s a quote from my emails to my illustrator Iris, responding to the first sketches:

My only immediate feedback is that the geeky honey needs to be more visibly plus-sized. Bigger, including larger arms! As two of my plus size staffers put it: “SHE NEEDS TO BE FATTER. JUST TELL IRIS *FATTER*!!!”

When the final version of the drawings came back, my exact words to the illustrator were, “Oh man, I LOVE GEEKY — but she’s still not big enough!”

Unfortunately, at this point the lines were hand-drawn and it was going to take a significant time/dollar investment to redraw Geeky’s complex outfit. Since I knew that we were already planning to do more bride characters in coming months, I opted to just say “Good enough,” and press forward.

The new illustrations are full color, and full awesome

The new faces of Offbeat Bride are totally up 'n' at 'em! Yes, Geeky ended up not quite as big as I might have wanted,... Read more

(But my illustrator Iris and I had an extensive chat about the issue, because it was my top priority for the character and no, the final version didn’t reflect that. These things can happen during a design & revision process, especially when everyone’s working under tight timelines.)

So for now, Geeky is more “sturdy” than the plus-size she was intended to be. As I said in my post, it’s still an improvement over the illustrations we had, which were skinny, skinny, and slender… but, yes: the next bride will be likely be an apple-bodied blondie with glasses and a red retro tea-length dress.

Well, her day in the sun has finally come — meet BETTY! Her dress ended up pink (it’s a branding thing!), but other than that, she’s exactly as I originally envisioned her: retro-fabulous, sassy as hell, and rocking her gorgeous apple body. Many thanks to the illustrator, Iris Chamberlain for bring Betty into this world.