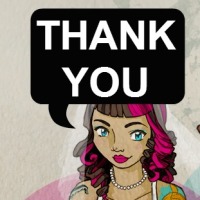 Two years ago, I got an email in response to a post I wrote on Offbeat Home, I got over my liberal guilt and got a housekeeper, I got this complaint from a reader:

I just wanted to comment more in a private setting rather than make a comment on a post: A post was made about hiring people to help clean and I just wanted to say that I found the use of the phrase “illegal immigrant” to refer to a person as being in poor taste. There is currently a campaign to eliminate the use of the word in that context, there is more info about it over at colorlines.com, I just wanted to say something because I know what it’s like to use a website and had someone use divisive language and wasn’t able to talk to anyone about it or perhaps did and the moderator was not sensitive to the issue. I wanted to bring it up because I love these sites and I see this as a space space for me when most spaces are not. Thanks!

I did a little research, and found that three months prior, in fall of 2010, a small journalism advisory board had made the recommendation that journalists stop using the term “illegal immigrant,” in favor of the phrase “undocumented immigrant.” That made sense to me. I mean, it was pretty remarkable that a reader was holding me to journalistic standards that had only been on the table for a couple months, but whatever: the shift in language made sense to me and it was an easy edit to make. I made the edit, and emailed the reader back thanking her for flagging the issue for me.

The AP Stylebook no longer sanctions the term “illegal immigrant” or the use of “illegal” to describe a person. Instead, it tells users that “illegal” should describe only an action, such as living in or immigrating to a country illegally.

Look, we all know I have my issues with call-out culture, but this particular situation was not a public call-out or performance art exercise in public shaming. The reader contacted me directly, explained her perspective respectfully and convincingly. As a result, I was educated on an issue I knew nothing about. It’s super gratifying to see that AP release this statement, and it makes me appreciate my readers all-the-more… thanks to you guys, the Offbeat Empire was officially two years ahead of the curve on this particular editorial issue. We might be some tiny little bootstrapped blogging start-up, but thanks to our readers taking the time to share their thoughts with us, we’ve had some awesome opportunities to learn some cool shit.

Comments on Offbeat Empire readers make me a better writer