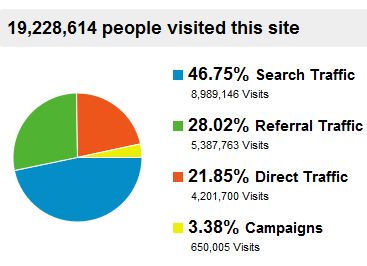 Of Offbeat Bride’s 500,000 unique monthly users (“unique users” being an analytics term, although my users ARE very unique in a more general sense), almost half come to the site from a search engine.

So the question then becomes, what incredibly brilliant SEO strategy did I use to get traffic like this?

Really, that’s it. I mean, there are a few other things I do, but I don’t think they have nearly as much impact as simply consistently producing original content that hasn’t already been published all over the web. “Curating” is for Pinterest. For Google (and people!) to like your blog, you need to do more than paste a bunch of photos you found on other people’s websites.

There’s an entire industry that’s built up around SEO marketing and consulting and for the most part, 90% of it is scammy. Google’s algorithms are smart, and they reward sites that consistently produce original content and aren’t shady.

I do have a few other tips, but they’re small potatoes: