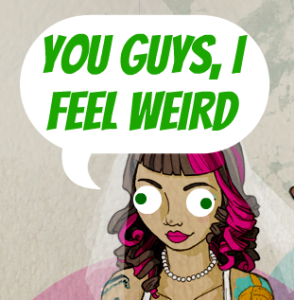 I’ve written about “othering,” and how in an online community where many people define themselves by their non-normativeness, it can be really weird to suddenly be part of the majority.

However, I’ve never dedicated a post to what I call the reverse discrimination fallacy… where community members allow themselves to feel marginalized because they’re in the majority.

This comes up a LOT on Offbeat Bride with less-weird brides feeling like they need to defend their more traditional wedding choices. As I originally wrote in 2011:

Then there’s what I call the reverse discrimination fallacy, where brides on the more traditional end of the spectrum complain that they feel excluded or demonized for being “too normal.” We’ve edited wedding profiles to exclude lines like, “I didn’t want a stuffy traditional wedding,” knowing that somewhere an Offbeat Lite bride was going to think to herself, “Oh, so now my wedding is STUFFY!? Fuck you, offbeater-than-thou bride.”

This issue comes up so often that we have an archive dedicated to brides wrestling with this offbeat/traditional friction, as well as the odd sensation of not being “unique enough.”

The reader sensation comes on the other sites as well, though — Offbeat Homies talk a LOT about feeling weird because they live in “boring” houses in “boring” towns, as if the majority of readers were dwelling in treehouses, industrial live/work lofts, and shipping containers. (Spoiler alert: they’re not.) One Homie recently noted that they felt like one of the few Offbeat Empire readers who actually likes Facebook, which I know from my web traffic is the opposite of the reality. Sometimes, when we provide a platform for a vocal minority, it can make folks feel like that minority is suddenly the majority.

The Offbeat Empire is all about sharing perspectives from lifestyles that aren’t as well-known or served by the mainstream media, and it’s always interesting to see how one of the results of that focus is folks who ARE more represented by the mainstream media feeling disoriented or alienated. We get weekly submissions from people who feel the need to defend or justify their more traditional choices. (Who are you convincing? We’ve always supported more traditional couples!) As I’ve written about in my post about the term “Offbeat Lite,” I think this gentle discomfort can be an awesome opportunity for personal growth… but as a community manager, I have to carefully balance that discomfort with making readers feel ostracized or pushed away.

It’s a weird balance… giving a voice to the minority while also ensuring the majority feels respected and included. It’s a balance I’m continuing to work toward trying to find. For me, the sweet spot with the Empire happens when we lean across the digital aisles and shake hands with folks living lives outside our own personal experiences.

Because you know what experience we ALL share? Feeling weird sometimes. Every last one of us.

Comments on “I’m weird for being normal”: the reverse discrimination fallacy