I am not a web developer, but I’ve spent over a decade working with web developers. In that time, I have been taught the most magical method of submitting tech support requests that make it easy for developers (or anyone!) to understand what the problem is, so that they can hopefully fix it.

Ever have trouble reaching ALL the Offbeat Empire sites?

Sometimes our anti-spambot tools get confuse and misidentify legit readers as spambots, and dark them out. There's no error, no messaging... there's just NOTHING. You've... Read more

I’m slowly training my staff to use this method, and while it takes some getting used to… it’s a game changer. Yes, it’s helpful when you’re trying to tell someone what’s busted on a website, but it’s also helpful when calling your ISP, or your cable provider, or the person who made your computer. It’s basically the best way ever to get help from someone. Here’s the template:

Write out the step-by-step process of exactly what you did when something went wrong. Include links to the exact pages you were on, and go into as much detail as possible. Don’t just say “I tried to upload a picture and it didn’t work,” instead say something like:

Here’s what I did
Using Safari on my iPhone:

2. What I expected to happen

This is key! Sometimes a broken thing is really just a misunderstanding — you expect one thing to happen, but the tool has been designed for something else. But even when a broken thing really is busted, it’s helpful to remind the person you’re reporting it to what you’re even talking about. They might be supporting tons of tools that work in lots of different ways. Remind them what this particular tool is, and what you think it’s supposed to do. So for instance

What I expected to happen

After I click submit, I expect the page to refresh, and to see my uploaded pony picture appear in the gallery.

After I clicked submit, the page refreshed as expected… but then instead of my pony picture in the gallery, I see a photo of a hippopotamus!

For extra credit, be sure to include:

I 100% walk the talk on this one. Here’s an Offbeat Bride Tribe bug I recently filed with my developer: 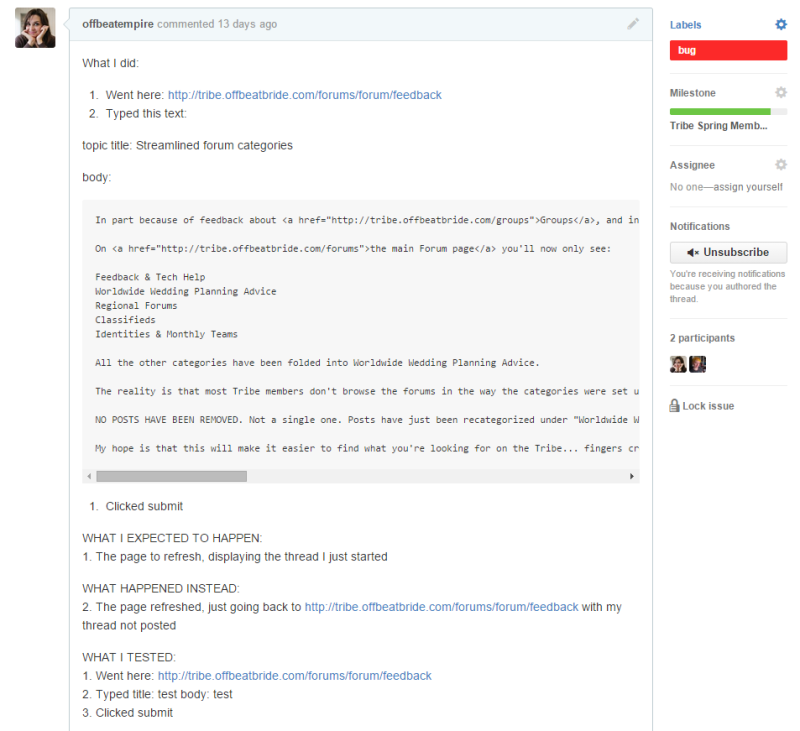 She loved it and was able to reproduce the issue and fix it quickly. *thumps chest* YESSSS!

Part of what I love about this style of tech support request is that it focuses on details AND expectations, with the goal being making sure that the person receiving it can reproduce what you did, understand what you wanted to happen, and easily see what’s busted. Sometimes, you might hear back that the thing you expected to happen was never going to happen at all — but even then it’s great feedback, because it might mean that something’s confusing in the user experience… and if you’re confused, someone else probably is too!

I’d love to hear from the nerds on this one — any improvements you’d make?