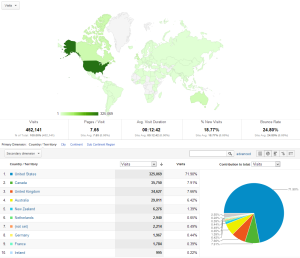 I’ve done reader surveys at the end of each year, starting with Offbeat Bride in December 2008. After five years of reader surveys, I’ve decided to take this year off… and here’s why.

It got too complex

As the Empire grew, I first added additional surveys for each site, then eventually merged them all into one massive survey for all four sites, with piped logic that showed you certain questions depending on your answers. Things got really fucking complex.

It got to the point where parsing the data was a major challenge. Yes, if I wanted to know what percentage of married Offbeat Bride readers also read Offbeat Home & Life at least once a week, I technically had that data. Figuring out how to pull that data, however, was a grunt… and I say this as someone who’s taken demography classes! Last year, the data was so complex that I never even got through analyzing it all.

Advertisers don’t ask for the data

The original impetus for the reader survey was half thinking it sounded fun (FUN! I like stats!), and half wanting to have reader data for advertisers. After 5 years, however, I’ve learned that 99% of advertisers want straight-forward data that’s easily available from Google Analytics: How many readers do we have a month? How much traffic do we have for a given city, state, or country? No-one’s asking questions like “How long are Offbeat Bride’s engagements? What percentage of married Offbeat Home & Life readers found their wedding vendors on Offbeat Bride?”

Back when we still had an open text box to share feedback at the end of the survey, we got a deluge of thousands of comments… very little of which was actionable.

I’d estimate that at least a fourth of the feedback that came in the reader surveys was requests for functions or content that we already had:

Our 2012 reader survey closed late last night, and it looks like about 3200 of you responded. Before I get into anything else, let me... Read more

We also got lots of feedback requesting functions we’d already explained we’d never be doing, like an Offbeat Families forum. We also got a lot of ranting, which while valuable in its own way, can be difficult to know how to take action on… if one person thinks our transgender content is tokenizing and offensive, should we stop running trans* posts?

We have no shortage of reader feedback

I’ve always tried to be relatively transparent about how I run the Offbeat Empire, and part of that is encouraging a lot of dialogue here on offbeatempire.com. Basically, if you’re a reader who’s interested in getting meta with me, I am pretty much always listening! I do my best to make it clear that the digital door is always open to feedback, and based on the number of you who take the time to share your thoughts via blog comments and emails, I think the message gets through. Also, given the big shift with Offbeat Families a few months ago, I feel like we’ve heard a LOT from readers this fall.

Ok, so what am I doing instead?

Instead of doing a huge complex reader survey once a year, I’m going to be doing small polls more often. See, I still have all sorts of questions for y’all, I’m just not going to ask them all at once. That way, it’s easier for me to parse the data, and easier for y’all to participate. In fact, I’ll have a poll for y’all next week.

So, there you have it. No reader survey this year, although it very well may be back next year. In the meantime, as always: FEEDBACK AHOY!