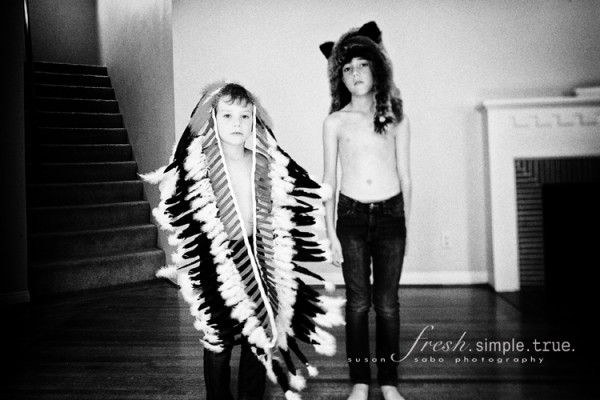 Last week on Offbeat Families, we ran a sponsored post for a family photographer featuring the image shown above.

Oh, DERP. You ridiculous meme. You have replaced words like DUH, DOY, D'OH, and DER in the vernacular of millions, a quick three-letter word to... Read more

Within a day, we’d gotten two comments about it. The first very articulately raised the issue of cultural appropriation: “I know that other people probably disagree, but the first photo makes me sad. Adrienne says it better than I can.” The second comment (from a different reader) was less articulate, snarkily asking the photographer if she “has the kids do hipster blackface as well?”

Both comments were removed (as per our comment policy on sponsored posts), but we also swapped out the photo.

But the issue of cultural appropriation is huge and important, so I sent this follow-up message to the more articulate of the two commenters:

About your comment below on Offbeat Families: the photo you were concerned about has been removed from the post, but I wanted to follow up with you via email. A sponsored post isn’t the best place get into a whole discussion about race and cultural appropriation, but I’d love the opportunity to dive into this more.I’m totally 100% with you on how the hipster trends of cultural appropriation are problematic (it’s something we’ve talked a LOT about on Offbeat Bride), but I’m confused about how a photo of the children reflects this.

So, for starters, we don’t know anything about the cultural background of these children — they could be half or a quarter Native. By accusing them of appropriation, there are some serious assumptions being made about people of mixed race backgrounds looking a certain way. For that matter, they could have a non-blood relative or family friend who is Native American who gifted this headdress. We simply have no way of knowing.

That said, even assuming they ARE white and have no personal connections to Native culture, I’m confused at how children involved in imaginative play can be considered hipster-ish cultural appropriation. Children engage in fantasy play all the time, including cultural play like pretending to be everything from Eskimos to French bakers to Aboriginal hunters to Russian spies. By saying these children are somehow guilty of appropriating for fashion or appearance feels like it’s suggesting that children are only allowed to play-act their own personal experiences.

Shouldn’t we be encouraging children to learn and explore other cultural experiences through play? Where-as status-seeking adults may wear a head-dress out of some sort of ironic fashion statement, it feels like these kids are potentially playing dress up in the same way they would by wearing a sombrero they brought home from a family vacation to Mexico, or a pair of little leiderhosen from Germany. I totally understand the issues of genocide and colonialism — but imaginative play feels like the perfect time to talk to kids about these issues.

The reader responded articulately that it wasn’t a hipster fashion issue, but rather “Sacred objects aren’t playthings. ‘Playing Indian’ is problematic, in that it almost always reinforces stereotypes about what it means to be Native. I’m not native, and I’m certainly no expert, but I have been doing a lot more research and thinking about my own white privilege recently, so the photo really hit me the wrong way, especially as the lead item.”

That said, she did have a great point — given the complexities of this issue, was this really the best photo to LEAD with? Probably not.

Those complexities lead Offbeat Family’s editor Stephanie and I both into HUGE discussions with our respective families about this topic. Then we opened up the discussion to our longtime contributor, Victoria Rodrigues, who’s written about Native American issues:

When I saw that post, I too had a gut reaction. The issue for me was NOT that a child playing “Indian” would be inherently problematic. Kids love to play iconic characters from other cultures which are usually simplified to the actionable elements: for my kids, wearing black and walking sneakily through the house is “being a ninja,” and doing kicks and cartwheels is “being Brazilian” a la capoeira. Like you said, that is a fantastic time for parents to step in and use their enthusiasm for a teaching moment.What raised my alarm bells was wondering how the image was made– was the headdress a favorite play item or a prop introduced for novelty? The picture doesn’t seem to evoke kids playing Indian, to me; it hit me as kids dressed as Natives for the novelty of the photograph. Of course, I do not know this family and it is totally possible that the kids wear those things every day and love them to death; it was just the way the image struck me as an outsider. Which brings me to the thing that does tend to bother me, which is such an image used for advertisement.

I get really squeamish with Native Novelty Advertising. At this point, the aim of the imagery has moved on from a child’s interpretative play to imagery created and selected by adults and marketed to other adults. I used to come across this often in the back pages of granola-mom magazines in the product ad pages. From images of native-looking people using the product to claims like, “Inspired by the traditions of the insert-indigenous-people-here,” I feel this kind of advertising was built on the foundation of romanticizing native peoples, which is totally a form of subverting those people. I don’t think these ads are all wrong or all distasteful; I just feel it is a ground which should be walked carefully and consciously on the creator and consumer ends.

This was SUPER interesting — I hadn’t factored in the added complexity of the image appearing in a sponsored post. To me, the image says “oh hey: you caught us playing!,” but I wasn’t thinking about it in the context of the photo being used to sell something — even if the product is just the photographic capturing of the play-time.

Well, I guess I had thought about the sponsored-post-ness of it from a comment moderation angle (“This paid post isn’t the place to get into a huge debate about this…”) but not from the angle of “This is an issue BECAUSE this is a sponsored post.” It wasn’t anything that either of the original commenters explicitly said, but it makes a lot of sense to me that of course the issues of cultural appropriation get stickier when there’s commerce involved.

Oh, and speaking of this being a sponsored post — what about that sponsor, anyway? The photographer in question was heartbroken and humbled by the experience. As she said:

I’d like to note that I wasn’t aware of the “hipster” fad with headdress. The photo that some readers objected to was not intended to offend anyone, and I apologize for that. This was just a game these brothers were playing. If I’d known about this whole hipster thing (I’ve just read all the blog links that were provided), I certainly would not have added fuel to that fire.

And no, I do not put kids in blackface. I like to photograph kids in their natural play, and what I love about that particular photo is the boys expressions. I consider what they were wearing to be secondary.

Again, I apologize if you were offended; that was definitely not my intent.

I don’t even know what the final moral of the story is here, but I really value that my work gives me the opportunity to have these discussions.

Comments on When is it cultural appropriation and when is it just kids playing dress-up?