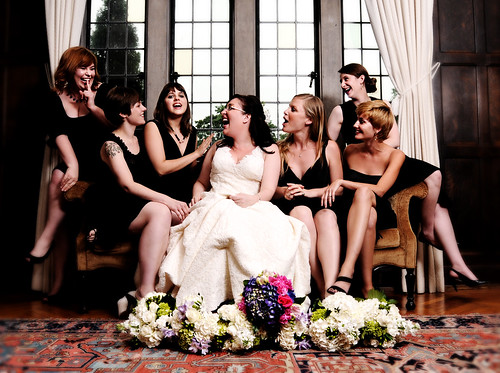 Thanks to Kate DePalma for submitting this photo for the Offbeat Bride Flickr pool.
Photo by Stephanie Saujon Baltz at La Photographie.

In 2007, I created an online community component for my website, Offbeat Bride. The goal was to give women planning nontraditional weddings a venue to network, share inspiration, and compare notes … and it quickly grew to 21,000 members.

Co-rumination is highly contagious. When your members see each other using your community as a platform to vent and rant, they want to join in either by chiming “me too!” or by practicing grievance one-upsmanship, with members crowing, “Oh, you think YOU’VE got it bad!? Take a listen to this…”

Before you know it, your online community can morph from a platform for sharing and networking, to a circle jerk of complaints and anger, filled with tooth-gnashing and arm waving at the awfulness and injustice of absolutely everything.

Now of course there are some communities where this kind of conversation is perfectly appropriate — groups supporting people in times of grief or loss, or consumer communities about tracking frustrations. In some communities, commiseration is just fine.

But in many online communities, co-rumination can lead the tone of the group into a downward spiral, creating a grumbling, grinching negative space where more interesting conversation is ignored in lieu of “Yeah, I hate that too!” and “Listen to how bad *I* have it.”

I dealt with the challenge by creating a very specific section of my online community for negative discussion. The members can tag their journal entry “RANT,” and I’m clear with all my new members that THAT’S the one place where they can vent and complain all they want. I wanted to recognize that there is some community value in commiseration — the “us vs. them” mentality isn’t always great, but there’s no denying it can foster a sense of camaraderie.

So while the bulk of my community remains focused on brides supporting each other and celebrating inspiration, the RANT category is the darker corner of the website that members can enter at their own risk. They know what they’re in for when they click into the group. And when members post negative rants outside the category, my moderators have a place to direct them — it feels important to have a release valve, rather than just saying “YOU CAN’T DO THAT HERE, AT ALL. EVER!”

No denying, this method requires pretty hands-on moderation — especially initially. I found that if I explained my motives to members (I even linked the co-rumination New York Times article!) people generally understood the logic behind the policy, and within a month or so most members were self-policing, directing new members to the RANT category when needed.

In a bit of divine comedy (because how the fates do laugh at my attempts at moderation. HA HA HA!) it shouldn’t be any surprise that the RANT category is one of the most popular sections in the Offbeat Bride community. 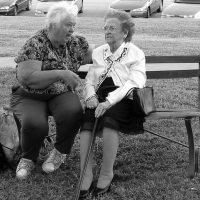 This is why we can’t have nice things: the siren song of negative parenting talk

The most common question I receive about Offbeat Families is WHERE IS THE FORUM!? We get the question every once and a while on Offbeat... Read more

But by keeping the negativity in its own little corner, I encourage members to focus their frustration in constructive ways. For instance, instead of complaining, “My mother-in-law doesn’t understand me! Why does she want me to spend $10,000 on the flowers when I just want to use blooms from our garden??” I encourage members to focus on what they’ve learned from their challenges, i.e., “When my mother-in-law wanted us to go big-budget on our flowers, I found that talking to her about why I wanted to for a more sustainable, less flashy option wasn’t working. Instead, I needed to show her a spreadsheet of our budget.”

Encouraging members to focus on what they’ve learned keeps the tone of the group more positive, and I hope I’m making the group more useful to members. People love complaining and sharing their frustrations, and it would be a thankless task to try to eliminate negative discussion completely. But by giving your members a safe way to approach it, you can avoid dragging the rest of your community down.

Comments on Co-rumination: why you can’t let commiseration drag down your community