But sometimes there are some posts that stump us. The post that went up on Offbeat Home yesterday, What a photo shoot taught me about being human and feeling beautiful, was mostly just about body image. Now, Offbeat Families’ top post of all time is about body image, so we know those readers like to chew over these issues… but this specific post wasn’t about postpartum body image, so it felt weird to stick it on Families. We published it on Offbeat Home & Life yesterday, and it did… meh. A couple comments. A few likes on Facebook.

Then, on a whim, I linked the post on Offbeat Families last night. The result was immediate: 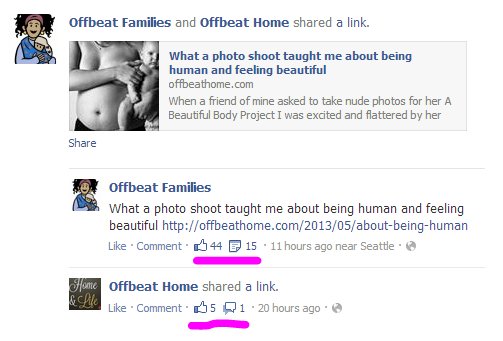 So we’ve got 5 likes/1 comment from Home & Life readers — as compared to 44 likes/15 shares from Families readers in half the time. (And that time was mostly overnight.) WOW.

Now, perhaps the issue was as simple as the lead photo — there was a baby in it, so maybe Home & Life readers weren’t interested? (The lead image was debated, and Megan decided this was her best option.) But the issue may also just be a readership tone thing. Offbeat Families’ editor, Stephanie, has cultivated a site that’s much more emotional. She’s fostered a community that can be more emotionally fragile than the other sites… and that’s saying something, since Offbeat Brides are notoriously stressed and testy. Maybe even though this post was a better content fit for Home & Life, tone-wise, it was a better fit for the community that reads Offbeat Families. It’s fascinating!

(Also, this is yet another lesson in how many people use Facebook as their primary way to follow posts on our blogs. I’ve written about it before, but it still baffles me that people trust Facebook to deliver their reading to them.)

Comments on Comparing how posts perform with different readerships