A few years ago, we worked SUPER HARD at comment moderation. It was a huge part of my editors’ jobs, and a significant source of stress. We heard from hundreds of readers that our comment policies made the Offbeat Empire the only site they felt safe to participate in online discussions. Our comment moderation was a big part of the Offbeat Empire, and something my staff put a huge amount of effort into.

Over the last couple years, things have shifted DRAMATICALLY with our comments. Behind the scenes, these shifts have been so natural that they felt kind of gradual (even when they weren’t), but when I look back I realize that it’s been a huge shift over a relatively short period of time. How we moderate comments now is significantly different in ways that even longtime readers may not be aware of. Here are a few of the things that have changed:

We went from three sites/three editors to three sites/two editors, which condensed the moderation work a bit. Now it was only two people watching comments all day every day.

We ditched the high drama site 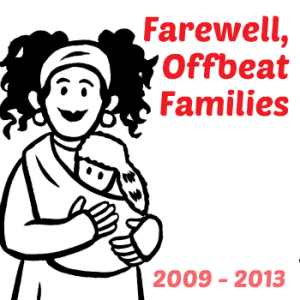 Four years is a good run: why Offbeat Families is ceasing publication (and how it will live on)

Over the years, I've made no secret of the fact that Offbeat Families (formerly known as Offbeat Mama) has been a challenge. The site launched... Read more

We get less blog comments on the remaining sites

Despite traffic increasing, over the last couple years, comment counts are down by at about half on Offbeat Bride. At least. But what’s interesting is that if you’re talking about shitty comments, I’d say we’re down over 80%. The reason for both these shifts?

All the Offbeat Empire blogs have corresponding Facebook Fan Pages. Each Page has a feed of posts links that are syndicated from each blog. It's... Read more

I gave up fighting this a couple years ago, and now fully embrace it. Why? Because comments on Facebook drive up our Page engagement, which means our Facebook posts are seen by more people, which means more people click to read our blog posts. There’s also this awesome reality: most people who want to leave shitty comments are just too lazy click actually, like, type their names and email address into our comment fields(omg, so old school!), because it’s so much easier to just leave their shitty comments on Facebook. This makes our blog comment moderation SO MUCH EASIER.

But what of all my 2012 railing against Facebook comments, my gnashing of teeth over truly great and helpful comments getting lost in the ether of Facebook? Well, here’s the truth:

Facebook commenters are a different community with different values

It’s just a different community management eco-system over there, for a lot of reasons:

Every once and a while we DO longer, thoughtful, and truly helpful comments on Facebook.. and we know what we do with those comments? We ask the commenter’s permission, and we turn them into blog posts! For example, this Offbeat Home & Life post totally began its life as a Facebook comment.

Facebook absolutely is where the biggest moderation drama comes from, but the awesome thing is that it also has two moderator dream tools I’ve been wanting for 15 years: HIDE and BAN.

Offbeat Bride's Facebook page has blasted into the stratosphere this month, with our Like count going from 33k to 43k in the last 30 days.... Read more

When you hide a Facebook comment, it’s only seen by the commenter and their Facebook friends. This means that as far as they’re concerned, their rant/spam has been broadcast… meanwhile, none of the other page followers see it. The commenter feels like they’ve had their say, but no one else has to listen to it. When we moderate comments on the blogs, the commenters immediately notice that they’ve been moderated, and then register their outrage that they’re being SILENCED. Facebook allows for quiet silencing that incites no outrage.

And of course Facebook banning is hugely powerful. Sure, WordPress allows you to ban someone by IP or email address, but those are easy for commenters to work around. Since Facebook comments are tied to people’s FB accounts, when their FB account gets banned… they are BANNED. We drop-kick people all the time.

Another advantage of Facebook comments is that they’re fleeting. Whereas blog post comments stay with a post in perpetuity, Facebook comments drift into the ether after about a day. Three years ago, this was HUGELY FRUSTRATING for me. Here in 2015, I’m stoked about it… it means that the low-quality comments aren’t hosted on my platform, and they drift away quickly.

OK, so what does this mean for people who love our comments?

I can’t promise that you won’t see shitty comments on Facebook, of course. We do our best to rein things in over there regularly, but we don’t own Facebook. We can’t make people play nice over there. We can hide and ban, but it’s outside of my business’s scope to make the randoms on Facebook play nicely.

This is also an entreaty: if you love the comments on the Offbeat Empire, join in. As much as I love that trolls don’t bother commenting, I do hope that those of you who enjoy the safe space in the Offbeat Empire’s comments will continue making the effort. We love our commenters!

Comments on How Offbeat Empire comment moderation has changed