UPDATE 2018: This post was written 7 years ago. The Offbeat Bride Tribe was shuttered in 2015 (for reasons totally unrelated to its name) and as the dialog about cultural appropriate and tribal affiliations has evolved, I can say I’d make different choices now. I’m leaving this post up as a relic. At this point, I do find the word problematic — although I still don’t find it racist. 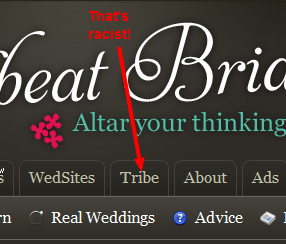 Since monthly readership of the Offbeat Empire sites is over 300,000 people, it’s to be expected that we’d receive a fair number of reader complaints. Sometimes, these complaints are truly educational (I had no idea that the Society of Professional Journalists had voted to replace the phrase “illegal immigrant” with “undocumented immigrant” until a reader emailed me about it) and other times they’re ludicrous (Offbeat Bride’s hilarious “motherfuckergate” comes to mind here). I’ve written about this before, but this last week I had an especially challenging reader complaint.

Here’s the deal: While it’s easy to capitulate (“Oh, you’re right! We’ll use undocumented immigrant from now on”) or blow someone off (“Sorry: swearing is part of Offbeat Bride, and if you don’t like it, this site may not be a good fit for you”), it’s harder to show genuine respect for the concern and passion that drives a reader to contact us, even when I disagree with their complaint. In those cases, the situation becomes finding a way to acknowledge the reader’s perspective, fully hear their concern, and yet still say, “Sorry: we’re not changing that.” Here’s the recent example:

Hi. I am a young woman who is going to get married. Your community seems like a very nice place. I like the website, and I’m interested in the community.But I am turned off by the tone-deaf wording you guys use for the forum: “tribe,” “tribe members” etc. Hasn’t anyone mentioned it before? Why do you use that phrasing? I find it offensive, especially in the wedding recaps when you say something like “Sarah, Teacher and Tribe Member.” I always think, oh, that’s cool, she’s Native… and then I remember, no, that’s just the asinine way you guys refer to yourselves. It makes me think that the forum is full of liberal-but-still-racist “color-blind” white people with no insight into their own privilege and prejudices. I’ve read the articles you’ve had about being more inclusive with great interest, but the prominence of this problem is a huge turn-off for me. Hasn’t anyone who is Native asked about it?

In any case, even though I’m not Native, I guess I’ll ask about it, and also request that you guys consider changing that problematic and frankly racist wording.

Thank you for your time.

I worked closely with Offbeat Bride’s managing editor (and my associate publisher) Megan to craft a response to this person’s email, shaping it from conversations we had with the Offbeat Bride Tribe’s moderators and community members. Here’s the response Megan sent:

First, I just want to tell you how much I appreciate your passion about both our community and issues of cultural sensitivity. Thanks for taking the time to give us your feedback.To answer your question, after four years and 21,000 registered members, one has ever commented on our use of the word tribe. We’ve had several very active Native American contributors, so I like to believe that we’d be the first to hear if they had concerns.

We use the word tribe to highlight the fact that this is a large group of people with a lot in common: “a group of persons having a common character, occupation, or interest” (Webster’s Dictionary). It’s also worth addressing that, on a larger scale, ethnic groups don’t have sole possession of the word tribe — it’s used in biology to describe groups of animals, and anthropology to describe societal organizations. It’s not just a racial, cultural, or ethnic word.

That said, after receiving your email, we wanted to address the issue directly with our Native American forum members. Here’s just one of many indicative comments that we received in response:

I was born on an Indian reservation in Forks, Washington to a black mother and my full Native American father that is a member of the Hoh tribe. As a card carrying member of the Hoh Indian nation, I am not offended at all by the Offbeat Bride Tribe. There are a lot of things that are racially insensitive — but this is not one of them. Thank you for showing your concern and taking the time to make sure you aren’t offending us.

Based on our own beliefs as well as this very direct feedback from our active Native American members, we’re going to stand behind our name. Although we disagree with you on this particular issue, we clearly share your concern about issues of language and cultural sensitivity, and genuinely appreciate your comment and the opportunity to have this conversation.

[related-post align=”right”]Thanking this reader for the opportunity to have the discussion wasn’t lip service. For me, the most valuable part of this exchange was the dialog I had with the Offbeat Bride Tribe’s members of the Brides of Color group. They had some truly insightful, incredible perspectives on a thorny issue that’s difficult to discuss online.

This is all to say, while sometimes we deal with the challenges of reader complaints, I also have the opportunity to learn incredible, powerful things from my readers. It’s pretty fucking awesome.

Comments on Is the name of the Offbeat Bride Tribe “problematic and frankly racist”?