If I’ve learned anything from a decade of online community management, it’s that you cannot teach people how to use your community “correctly.” Your members will use the tools you make available the ways that suit them, and time spent trying to convince them to use them differently is just a waste of moderator energy. Your tools MUST match the needs of your community — if your members are not using the tools the way you intended, then you need to reassess the tool.

This situation gets even more complex because the needs of a community shift as it matures. A tool that might have been awesome at one era of a community’s development might be completely pointless during another era. You can’t get attached to your tools, because if your members aren’t using them, they’re useless.

Ok, ok. Less vague-blogging. Let me give you a very specific recent example from the Offbeat Bride Tribe: the killing of the Primal Scream Therapy section.

Primal Scream Therapy was born from a specific era of the Offbeat Bride Tribe’s development. The community launched on Ning fall of 2007, and by mid-2008, the Tribe was teetering dangerously close to becoming a cesspool of high drama. Interest in the community was through the roof, the number of sign-ups were totally overwhelming, and member activity was almost impossible to keep up with. (At the time, a colleague at Ning informed me that we were one of the most active networks on their system.) Unfortunately, members got into a drama-one-upsmanship cycle with highly contagious content. Every other post ramped the drama up higher: hating on in-laws, cursing out vendors, and bitching about bridesmaids.

Members started complaining: they were already stressed out by their own wedding planning, and they’d log into the Tribe and immediately be hit with a barrage of bitchery, exclamation points, and rage. I got one email that began, “I logged on to look for some centerpiece ideas, and suddenly I’m hit in the face with a member comparing her caterer’s behavior to child abuse she’d experienced.” Yikes! It became clear that unless I wanted the Offbeat Bride Tribe to be defined by negativity, ALL CAPS, and loops of triggering frustration, we’d need a separate place for these rage-y conversations to happen.

Primal Scream Therapy was a special section of the Offbeat Bride Tribe that was set up specifically for ranty, ragey, and potentially triggering discussion. On Ning, it was a sub-group, where members could just bitch amongst themselves. (And it’s telling that it was the most popular group on the Tribe.) On the new Tribe that launched in January, we set Primal Scream as a category of member journal entries, which ONLY appeared on a separate Primal Scream page. The entries didn’t get posted on the main page of the Tribe, they weren’t listed on the Journal page, and comments on Primal Scream posts didn’t appear in any of the Tribe widgets. We filtered this way to ensure three things: 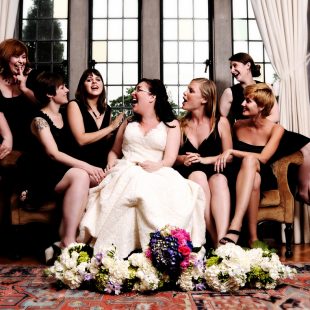 1. Members had a supportive space to rant and let off steam
2. Members had a safe space to discuss issues like abuse that could be triggering
3. Members just looking for centerpiece ideas or DIY tutorials didn’t get emotionally blindsided by meltdowns or triggering issues

Setting up Primal Scream involved a fair amount of developer time to code filters, and ate a HUGE amount of server resources… but it felt worth it. By keeping the Primal Scream section separate from the rest of the Tribe, we were trying to create two separate safe spaces for members: one low-drama happy space for your average member just swinging by for some inspiration, and a separate more supportive safe space for members in the throes of emotional wedding situations.

It’s worth noting on both the old Ning Tribe and the current version of the Tribe, the Primal Scream sections were one of the most visited sections of the site. This is super important, and something I’ll talk more about later.

For months, we’d been noticing the Primal Scream section shifting away from the ragey posts that inspired its creation. We saw posts that were generally sad, but not especially ragey. We saw posts that were completely normal, but mentioned being mildly frustrated with a parent or wedding attendant. We saw a few posts about triggering subjects (abuse, self-harm, etc)… but these were exceedingly rare. We even saw posts that shared awesome DIY projects or just run of the mill wedding planning, leaving my moderators completely stumped. Mostly, Primal Scream had become a corner of very mild, gentle frustration. We started wondering why members were using it at all. Was it worth the server strain?

What should we do?

Once Kirsten and I recognized that the Primal Scream tool wasn’t being used in the ways it’d been set up for, we decided it was time to ask our members. Kirsten posted on the Tribe explaining the backstory, and asking members “Why do YOU post a Primal Scream? What are you looking for and what do you get?”

The responses shocked the hell out of me, honestly. Some members said they put everything into Primal Scream because they were so afraid of a moderator moving their post there that they’d rather default to it than be “told off” for posting in the wrong place. (“I totally have mod-fear,” one confessed.) Other members informed us that they felt like they were being treated like “dummies, that aren’t using this category correctly.” (I immediately stepped in and was like “WHOA WHOA WHOA: we’re asking because we want to cater the tool to how you guys are using it; not because we want to force y’all to use it differently than you are”)

Perhaps the key point was this comment from a member:

We need a culture where wedding planning ups and downs are a natural part of the process, not something to be hidden away for fear of bringing someone down.

So basically, in 2008 we created a safe space… but in 2012 this evolved into a situation where some members felt some significant hostility about being somehow “hidden away.”

Clearly, Primal Scream was no longer working for anyone. The moderators were confused by the stuff that was appearing there. The members felt ostracized and socially anxious about it, some opting to post everything as a Primal Scream rather than risk hearing from a moderator. (The anxiety around being moderated is a separate issue, and one that makes me really sad since I have the nicest mods I’ve ever encountered online, who spend a lot of time writing and rewriting their emails so they sound as nice as possible…and yet they’re still seen as scary monsters.)

Based on the feedback to Kirsten’s post, we made some big shifts in the Tribe’s Journals section:

Simply put, a tool we developed in 2008 doesn’t match the needs of my members in 2012. We just don’t see many high drama posts on the Tribe much any more. Could it be that all my talk of the dangers of co-rumination finally worked? Could it be that the community has just generally matured? Could it be that Ning was so frustrating to use that it made the tone of the Tribe more RAWRy? I genuinely do not know. Even the most ragey of the Primal Screams were pretty tame, and a good number of members felt intimidated and even insulted by there being a separate space for ranting. It shouldn’t be a surprise that the Tribe’s needs have shifted, and I love that the flexibility of the BuddyPress platform makes it relatively easy for me to shift the tools to meet those needs.

But you know what? I think there’s something else going on here… something a little darker. I’ll write about it tomorrow.