For the last four years, the Offbeat Bride Tribe’s traffic has been in decline.
Across the web, forums are dying as we all increasingly default to social media like Facebook. What does this mean for the future of the Tribe? 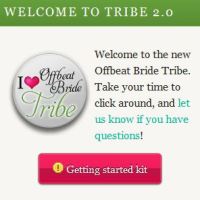 The Offbeat Empire is a bootstrapped company. I started it with money out of my own pocket, and have never taken on any investment dollars or venture capital. This means that by necessity, the Empire always has to function in the black — simply put, the company has to be profitable, because there is no other money other than the money coming in.

For the most part, I love bootstrapping…but sometimes it’s hard, and the Offbeat Bride Tribe’s migration earlier this year was one of those times.

I started the Offbeat Bride Tribe on a whim as a way to test out a platform I was curious about, and I have regretted it ever since because A) community platforms suck and B) community management is emotionally difficult for me.