What it’s like to still be talking about your wedding, 15 years later

Think about what you were doing 15 years ago. Think about who you were, the choices you were making, and the ways you talked about those choices. Think about your motivations and your priorities. How was who you are now reflected in who you were then? How did you think differently than you do now? How can you look back and see the ways that the choices that you made then, played out in where you’ve ended up now?

Last year, when Seal Press contracted me to completely revise and update the Offbeat Bride book for its third edition, I had to get close and personal with those questions for months. As if that wasn’t humbling enough, at the same time as I was going through that revision process, I was also writing a book about recovering from my divorce. GOOD TIMES!

More about that other book later, but now that the third edition of Offbeat Bride is on bookshelves nationwide (and of course available on Amazon), let’s talk about what’s new

So what’s it like editing a book about your wedding 15 years after the fact? It’s humbling. It’s embarrassing. It makes you realize how much you’ve changed, and it makes you deeply profoundly grateful for the ride.

With the exception of the new introduction and two chapters written for the second edition in 2010, the Offbeat Bride book was written in 2005. Here in 2019, tons of the language in the original edition felt deeply out of step with Offbeat Bride’s current voice.

Every last word in the book was re-edited and revised, which included a lot of clean up for stuff that I thought was funny in 2005 that is definitely super not funny in 2019… stupid jokes about smoke signals (insensitive toward Native Americans), sweatshops (insensitive toward foreign workers), consent (insensitive to sexual assault survivors). I repeated used the word “bitchy,” which some folks see as a misogynistic slur, even when used by women to describe themselves.

Even as a bisexual woman with a lesbian mother, my writing 15 years ago was steeped in heteronormativity. I clearly wasn’t familiar with the concept of gender neutrality. Parts of the book were painful to read. My youthful stridency meant that I leaned towards being dismissive and openly hostile toward more traditional weddings.

Seriously, think of yourself 15 years ago. Think about how you talked, and how you acted. I wasn’t stupid 15 years ago, but reading my old writing was deeply embarrassing. Ouch. What an education… and what an opportunity to get the book updated!

In addition to a thorough revision of all my old writing, Offbeat Bride’s third edition includes a ton of new content, like…

All told, the third edition of Offbeat Bride is certainly a much better book than the one I wrote in 2005. And duh: it was uncomfortable AF to look back on things I did and said 15 years ago. 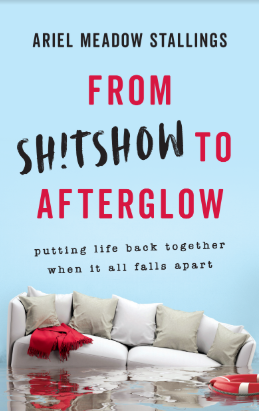 An irreverent guide to rebounding after loss, grief, and all the other cruel crises life throws our way Sometimes your foundation crumbles. Sometimes you realize... Read more

Looking back, I can see the cracks of things that eventually fell apart in my life.

Looking back, there were several times during the revision process that I wanted to reach through the pages of my old writing and shake my old self because I really should have known better.

Looking back, it’s really hard not to throw my former self under the bus.

Part of the process of maturation though is gaining compassion for ourselves, and our messy processes of learning and growing through our lives. I’m certainly not done growing, and I’m sure I’ll look back years from now and be deeply humbled and disappointed about where I’m at right now!

This concern is especially timely as I stare down the barrel of my next book being published. From Shitshow To Afterglow will be on bookshelves in June 2020, and I can only wonder what things I’ve written in its pages that I’ll regret terribly in a few years. Shitshow is a book about picking myself up after my life fell apart in 2015, so it captures a wayyyy messier time in my life than wedding planning. Oh well. No one said growth was easy or tidy.

For those of you planning weddings, I hope you’ll consider buying Offbeat Bride‘s third edition!

For my beloved offbeat wedding vendor friends, I hope you’ll consider snagging a copy for your client lending library.