As of last week, Offbeat Bride is now a DECADE OLD. (Aww, that first post is so cute.) It’s still one of the biggest ironies ever for me that the website was launched just as a way to promote the book that was supposed to finally launch me into what I imagined as “real success.” In 2007, digital publishing was still the less-respected nerdy little sibling of the “real” publishing industry, and being a published author was going to be my big ticket to legitimacy and recognition.

Har har! Joke was on me! Because while my book reached a few tens of thousands of people over the last decade, the website has reached approximately 45 MILLION READERS. What else is there to say but holy shit? That is a lot of people.

If only 2007 Ariel, with her pink braids and bong and big dreams of book publishing industry legitimacy could have known that the website she made to promote the book would turn into the business that would take her into the next decade? What the fuck! Cosmic irony.

Ok, so let’s use this as an opportunity to talk about what’s currently on the table for Offbeat Empire:

Members of the Offbeat Bride Tribe may remember the Tribe’s built-in interactive version of our famous checklist. When the Tribe closed in 2015, that version of the checklist died, but my developer Kellbot has been working to bring it back! This new interactive checklist will be available to ANYONE WHO WANTS IT (no need to get approved as a member), and unlike the version on the Tribe, you can change your wedding date whenever you want. (Har har! Remember that? What a pain in the ass.)

Like the old version of the checklist, this will also integrate everyone’s favorite Offbeat Bride confirmation messages — stuff like “FUCK YEAH! You completed the fuck out of that task. Go you!” I like to think people loved the checklist on the Tribe because it was useful, but it may just be that the confirmation messages made them laugh… which… that’s ok with me too.

Also like it was on the Tribe, the functionality will be pretty bare-bones — I’m a publisher, not an app developer! We’re almost ready to start beta testing what we’ve got. If you’re interested in being a beta-tester, leave a comment. We’ll probably be ready to start testing in a few weeks. I’ll have more to say about this soon!

Yeah, so uh: that’s a thing that happened and here I am a year later and I’m about 70% done with the book I’m writing about the process of healing from the best worst thing that ever happened to me. To the disappointment of some longtime readers, I’m keeping most of my divorce writing pretty close to the chest while I’m working on my book… but you can get a hint of what I’m working on with this article I wrote for The Guardian. 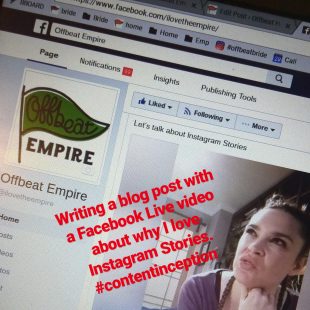 Yesterday I posted on Offbeat Empire's Facebook page about how, if folks want to follow along with me behind the scenes, they should follow @offbeatbride's... Read more

As those of you who follow along with Offbeat Bride’s Instagram Stories know, working on this book is emotionally rough at times. It’s important work that I’m excited about getting out into the world (it’s such a common experience, and grief is a weird opportunity to do some really interesting personal development work), but UG it’s not easy writing to do. I have to pace myself or else I get the emotional bends.

Other than those two big projects, it’s mostly just business as usual at the Empire… I’m still running the company pretty lean, but my editors Catherine and Megan dig away in the content trenches, my developer Kellbot is busy with the checklist and fixing all the shit we manage to break, and Tiff is the ray of sunshine beaming the love to all our sponsors and advertisers.

Thanks to each of you (…all 45 million? JEEZ) who’ve been a part of the last decade of Offbeat Bride. Lately, it seems like I’ve been hearing more from longtime readers… folks who got married years ago who are still around, and who pop up like meerkats to say hi. It always gives me the very warmest fuzzies. Love you guys, for real.