Before I dive into algorithms and content marketing and bla bla, first let’s talk about the big picture: 53% of Offbeat Bride’s social media traffic comes from Facebook, and 44% comes from Pinterest.

Then, let’s review the social media strategy for each channel:

At any moment during the day, I can look at Offbeat Bride’s real-time stats and know exactly which posts have been recently shared to Facebook. A post goes up on Facebook — BAM, we get a traffic spike on that post.

Have you ever visited Pinterest's "Source" page for your website? This is the page that displays the most recent pins sourced from your website. You... Read more

Meanwhile, at any moment during the day, I can look at Offbeat Bride’s real-time stats and see that about half the referral traffic to the site is coming from Pinterest — but the traffic is rarely from our pins, and the traffic is spread across hundreds of posts.

What does this mean? It means that while both Facebook and Pinterest traffic are hugely important to me, I interact with the two networks very differently.

As a publisher, Facebook has me trained like a dog: we post all day, every day on our Facebook page because we see an immediate, real-time traffic boost when our posts go out. When I engage with Facebook as a publisher, I am rewarded with traffic from the site.

As a publisher, I have very little control over the traffic Pinterest sends, even though I also post there all day every day. Pins from Offbeat Bride’s account usually generate single digit repins and hearts, despite 55k followers. Pinterest traffic comes in a nonstop steady trickle — but most of that traffic is not from the fresh pins that I post… but rather from my pins from six months ago or even a year ago that just keep performing. In fact, some of the pins that drive the most traffic to my site aren’t from the Offbeat Bride account at all — they’re from random pinners from a year ago.

This means that where-as Facebook’s algorithms have created a “feed the beast” Pavlovian response in me (must keep posting, must keep posting…) there are some days when I wonder why I post to Pinterest at all.

At this point, Pinterest is almost more about market research than it is content marketing. Going to Pinterest’s Offbeat Bride source page remains a great way for me to see what content on the site is resonating with pinners in real-time… but as a publisher, Pinterest’s algorithms don’t seem to reward me pinning. 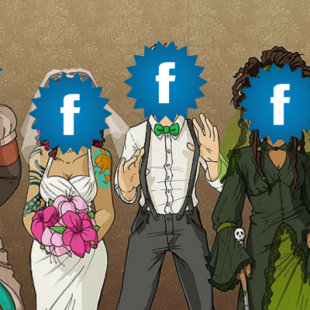 Weeks ago, The Atlantic published an article called What Blogging Has Become. Theoretically the article was about Medium.com, but really... it was just about the... Read more

I don’t know if this is intentional or not. I do know Facebook is very cunning in their strategy to get publishers completely dependent on clicks from the site, and are getting the point where they reward publishers for using their Facebook page as a content management systems. (“Why upload media to my own website to then share on Facebook, when I can just upload it directly to my Facebook page and have way better engagement?”) Whatever Facebook is doing, it’s working — I spent a LOT of time thinking about Facebook and interacting with it.

It’s interesting that Pinterest’s algorithms seem to almost actively discourage content marketing via self-pinning. As a publisher, I keep on pinning out of a sense of duty. I get a lot of traffic from Pinterest, so pinning almost feels like a way of saying “Thanks, Pinterest,” because my pins don’t seem to have much other value. Pinterest doesn’t seem to want me thinking about it… I wonder why?